Lori Ann Cole and Corey Cole, the creators of the Quest for Glory series, a ground breaking adventure and RP game from the early 90s, are great supporters of critical analysis.

See some of my comments on their forums;

Our response here should be independent of the reality of climate change and its human influence.

The fossil fuel supply is limited. Currently, it is the only source which can fuel jet aircraft (based on its high chemical energy to mass ratio), meaning it will retain a high military value for some time. In a few hundred years fission fuels required for 20th century nuclear power plants will become rarer (uranium), meaning the only long term option is nuclear fusion (hydrogen/helium). Fortunately our supplies are plentiful. For early generation fusion, this will constitute Deuterium (extractable from sea water) and Tritium (breedable in fusion reactors), and then Helium 3 (requiring potentially moon harvesting – although providing an even cleaner alternative). It will be thousands of years until either sources are depleted.

With respect to environmental safety; in all designs, there is no probability of melt down (stopping the reaction basically involves switching off the power). The radioactive half lives of first generation fusion power by-products are orders of magnitude less than that used in fission power (they naturally decay x1000 faster, meaning they do not stay radioactive for thousands of years). Hydrogen bombs use the same process, which for reference are 1000 times as powerful as an atomic bomb (uranium/fission), like that which was dropped on Hiroshima. The main task of scientists today is to harness nuclear fusion in a controlled manner (effectively creating a star on earth). The two main projects working on this at the moment are ITER (based upon a Russion Tokamak design / magnetic confinement), and LIFE (laser inertial confinement, promoted by the US at the National Ignition Facility).

Atomic hydrogen constitutes 90% of the visible universe, and helium nearly 10%. Fusion is the primary source of energy in the universe. Massive stars are kept from internally imploding as a result of nuclear fusion: all stars 30% or greater than our own would collapse and become black holes [/neutron stars], instead of becoming shining power plants for billions of years. In the case of our sun, nearly 50% of the age of the universe. It heats the earth to provide wind and wave power, and of course feeds solar cells directly. Heavy elements including those used in fission power plants are known to be the by-products of supernovae, and therefore a result of nuclear fusion. Elements heavier than iron actually take energy to join, and give energy when split – the opposite of fusion. Perhaps tidal energy is an to the rule exception, but even that is affecting the moon’s orbit.

Right now, the world is governed by those who think the 1960s was the peak of human ingenuity and scientific progress. If human climate change is both real and negative, then I couldn’t imagine a worst state of public opinion (mass conformity to a futile ideology). Individual efforts in 1st world countries are not going to solve the problem (apart from making us feel good – hence the morality). Wind mills are not the solution. There is a reason people don’t use “renewable” energy – economics. One has to solve the economic problem; making it both viable and competitive. This means funding research and education.

Maybe this is why their games are so good- because they don’t always share the same concerns as each other and are able to represent/integrate their synthesis. The truth of any matter is able to address all concerns...

Regarding the classification of personal freedom. The fundamental issue is not abortion/birth control; it is both rape and why women are assumed the burden to control pregnancy themselves. Interestingly enough, there is a common basis – and it is not human nature, however suggestible the subconscious may prefer to remain. Rather it is artificial – a by-product of misrepresentation called objectification. It is not evolutionarily advantageous for a woman to admit failure in a man. Neither is it evolutionarily advantageous for a man to concede weakness or damage, and so women are left with the result. Hence the common conclusion that these issues (which represent the mitigation of the result) belong to women and are framed under such terms, despite the fact their implications obviously go beyond mature female organisms.

I didn't have any problems with the article as it was obviously bi-directionally biased. That is actually what I found so constructive about it.

Have people given up trying to articulate the division which besets them? Or perhaps they are such great believers in sexual equality (as long as they can retain their fantasies) that they have dismissed all purpose in a conversation that extends to the opposite gender.

To say that people are against women or exclusively homosexually orientated individuals is absurd, and am surprised anyone has fallen for that semantic trap. And this is exclusive homosexuality albeit whose representation in the animal kingdom has yet to discovered- if indeed it is a natural phenomenon. It is interesting that republicans have the dignity to take such nonsense in their stride - rather than declare an equally absurd war on baby girls. They just don't believe that truth is democratic.

Yet any discrepancies in conclusion (or vote as the case may be) signifies a real and present information gap. Why on earth have we failed to address this? What is causing people to feel threatened? Is it perhaps that they have failed to identify the basics- and they are trying to solve the inevitable consequences thereof without realising that their mission is impossible? That any human gain in one hand will result in the sacrifice of another? Is it not that in mutual error we have lost trust in the other? That is what happens when you start to tolerate dehumanisation.

It is fair to say that when a nation classifies the objectification of a human being as artistic freedom of expression they have given up on logic entirely.


They currently have a Kickstarter campaign going for game development on Hero-U(niversity): Rogue to Redemption.
Posted by Richard Bruce Baxter at 6:15 AM No comments:

A Mendooran pub is having trouble with animal rights. Or was it human rights? It is difficult to tell based on their Wednesday advertising.
Posted by Richard Bruce Baxter at 9:38 AM No comments:

David Marr doesn't play the game straight. His game is all wonky. You have been warned.

Before The Foundation came to light, a letter was sent to the Sydney Morning Herald requesting David Marr to be permanently retired for his comments protecting a said artist who had a mother give her 12 year old daughter away for photography. 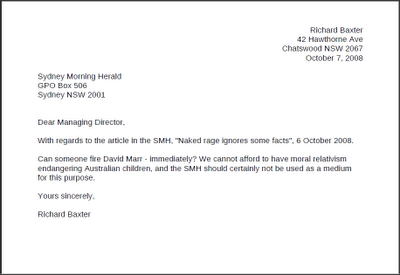 Posted by Richard Bruce Baxter at 7:34 AM No comments: