Posted by Richard Bruce Baxter at 2:30 PM No comments:

He Who Must Not Be Named: how Censorship Accelerates Civil Conflict

So the book burning begins.

What if I told you there was an argument so persuasive, that anyone exposed to it might change their view of the world? While so transformative, that in order to maintain social order, those in authority would be obliged to question the motivation of anyone communicating it?


"It is clear, as I am sure you are aware, that UK legislators are now moving rapidly towards introducing regulatory powers to deal with those who seek to use the garb of freedom of speech to, instead, preach violent hate with the aim of damaging and undermining our society."

Again, an argument so persuasive, and socially transformative, it might even make people consider sexual deviants as human beings? Who would claim authority to delineate such radical ideas? Those whose freedom had been granted to them by free speech itself? (https://twitter.com/richbrucebaxter/status/1100527483437297664)

Does the First Amendment only apply to sufficiently obedient individuals, characters who play not, accepting their pre-allotted program? Human beings detest being herded like cattle (https://twitter.com/richbrucebaxter/status/1107774899232268288). Thus censorship of speech is the most efficient pathway to destabilisation. Everyone honest knows this, even the most ideologically driven utilitarian (http://www.youtube.com/watch?v=on4O4g5pQrw&t=0m15s).

"This attempted abolishment of rights by the left will result in a dramatic polarization of the people in the United States and eventually a fracturing of the US along cultural and racial lines."


Likewise, institutionalised censorship of language is the ultimate litmus test for national infiltration by authoritarian actors. Dissenting voices are silenced, the public is denied access to alternate ideas or opinions. "Make no mistake", there is little difference between fascism and marxism. It can scarcely be said that communism has exterminated disproportionately more of its own citizens than national socialism. Accordingly, the current censorship saga is causing a massive crisis of credibility for our institutions.

Furthermore, censorship of speech is disproportionately favoured by low GI individuals. Meaning, it is statistically more likely that sociologists including those educated in politics will unwittingly favour such censorship (vs for example, those trained in hard sciences). GI is also positively correlated with "openness" and humour.


Yet elements of the British government are actively deleting critique of their censorship agenda. Facetious tweets which a) compare the proposed digital erasure of dissenting citizen voices to that of a "communist" "police state" and b) categorise the dismissal of counter-narrative positions through ideological ad hominem as "propaganda", are buried by social media; https://twitter.com/tom_watson/status/1101931566387941376 (https://twitter.com/richbrucebaxter/status/1102025471720476672). It is particularly disturbing that this propaganda continues to be fed to the public now that we have direct evidence calling human beings names doesn't work; that it just radicalises them.


It is evident the modern propaganda machine aims to categorise dissenting opinions as "hate", without acknowledging the natural purpose of such emotion (for example, abhorrence of paedophilia or abduction of a community's high-value gamete sex). Similarly, once a totalitarian censor censors speech, they can't stop censoring, because they must forever silence any reference to the dissident. Now on Facebook, the mere mention of "Tommy Robinson" is banned, resulting in immediate suspension/termination of the user. This phenomenon is known as second order censorship, as witnessed by the USSR (http://www.youtube.com/watch?v=uN6PDbTv4Ug&t=6m0s, http://www.youtube.com/watch?v=93ivPbYk-cU&t=0m50s). Next on the authoritarian hit list: Anne Marie Waters. [update 4 May 2019: referencing Alex Jones/Info Wars on Facebook is now illegal.] 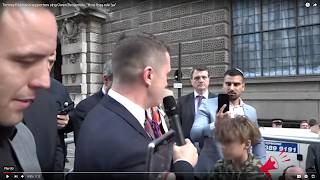 What is equally disturbing is that Tommy Robinson content is not even "alt-right" (according to its most broad definition; having a preference for racial preservation), and certainly not "racist" (according to its traditional definition; believing in racial superiority). He was charged for forcibly expelling (punching) 'neonazis' from the EDL, making an international billionaire's endless supply of funding for domestic terrorism (ANTIFA) unoriginal and pale in comparison. What then is the reason for its censorship? Because it is moderate and therefore attractive to the masses? Is the establishment afraid of losing power over the democracy it purports to acknowledge?

Fortunately for the wizarding world, Magic, albeit a non-additive trait based on near 100% recessive dominance (as demonstrated by the Potter, Weasley, Black, Sayre, Longbottom, and Malfoy family trees; some Squibs presumably carry two copies of the favourable allele), cannot be lost from the gene-pool by cross-breeding. Yet in real life we have no such guarantees. The vast majority of the human phenotype is based on the interaction of genetic material at different loci (epistasis; gene-gene interaction). If any such complex adaptations arose in a specific human population over 50,000 years of separation (approx 1/80000 of the evolutionary age of the organism), and if they involved interactions at ~10 or more loci, then the likelihood of them being completely recoverable after ~10 generations of indiscriminate genetic crossing between populations is negligible (bar artificial gene editing). GI is one candidate for which 50% of its effect is predicted to be non-additive (https://www.nature.com/articles/nrg.2017.104 / https://europepmc.org/articles/pmc5985927). Ingroup selection was presumably critical to the acceleration of this trait in Ashkenazi Jews, and it likely relies on interaction at more than one locus. Slytherin may be unpalatable to our most egalitarian affections, but it is not without reason that we tolerate viewpoint diversity. Conservatism is risk management.


It is an educated citizen's social responsibility to read every banned book. Free citizens never negotiate with psychological terrorists.

(This review is not to disparage censorship initiatives devoid of 'logophobia', of which some here criticised have contributed to, and for which they are respected).
Posted by Richard Bruce Baxter at 9:23 AM No comments: